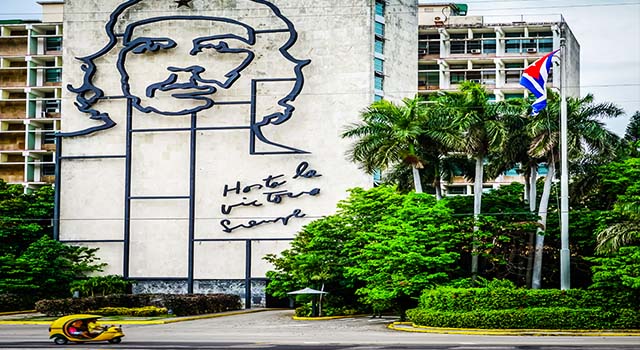 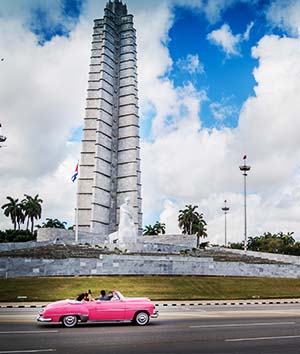 The city square is a tradition that can be found around the world. Lending itself to many purposes and ideally suited for leaders to address the masses, the city square is often an integral part of a city’s landscape.

One of the biggest and most famous of these is Havana, Cuba’s Square of Revolution. Constructed during the reign of President Fulgencio Batista, the square was originally known by the moniker Civic Square, and it was only in the time of Fidel Castro that it gained its current name, Revolution Square.

The Square of Revolution has many unique features and landmarks, including the magnificent Jose Marti Memorial. This incredible tower measures an astounding 109 meters, and from the top, visitors are treated to an absolutely breathtaking view of the city. In front of the tower is a sculpture of Marti, who is famed as a writer, poet, and hero of Cuba.

Another of the square’s most iconic sculptures actually comprises the entire side of the Ministry of the Interior since 1993. “Hasta la Victoria Siempre” (or Towards Victory Forever) is a a 16 tones sculpture by Cuban artist Enrique Avila, of the famed revolutionary Che Guevara.

The simple yet powerful lines of the sculpture are inspired by the very handwriting of Ernesto Che Guevara himself. The wall containing the sculpture encases Guevara’s office which, although not allowed to be toured by the public, is said to be fully intact and entirely untouched.

The third sculpture in the square is that of Camilo Cienfuegos, perhaps best known as Fidel Castro’s confidant during the Cuban Revolution. Beside this sculpture, visitors can read the words "Vas bien Fidel" (or you are doing well, Fidel) in Cienfuegos’ own handwriting.

The Square of Revolution is home to many important events. On May 1st, travelers lucky enough to be in the city can take part in International Worker’s Day, one of the biggest celebrations on the island.

July 26th also marks an important celebration in the Square of Revolution as locals gather to commemorate Fidel Castro’s famed attack on Santiago de Cuba’s Moncada barracks. Both events are truly remarkable to witness and offer an experience that visitors will not soon forget.

The Square of Revolution is both a symbol of Cuba’s history and the place where it is still being made. Here, Castro has addressed millions of Cubans on a wide number of occasions, and it is also the home of Cuba’s National Theater. Few icons along Havana’s landscape have quite the history and story to tell as Revolution Square, and for those lucky enough to visit the island, no Cuba educational trip can be complete without a tour of all that the plaza has to offer.

When looking to take part in Cuba education tours, it is worthwhile to seek out authentic Cuba tours that make stops in places like Cienfuegos, Trinidad, and Vinales, as well as Santiago de Cuba. There is so much life and learning that lies outside of the island’s capital, and travelers looking to truly learn about Cuba will want to see remote areas of the island that are largely untouched by tourists.

Taking the time to find an escorted Cuba tour that offers a comprehensive glimpse of life on the island is certainly worthwhile, and with the future of American travel still largely undecided, the recent lift on educational travel sanctions means that now is the perfect time to take a tour!