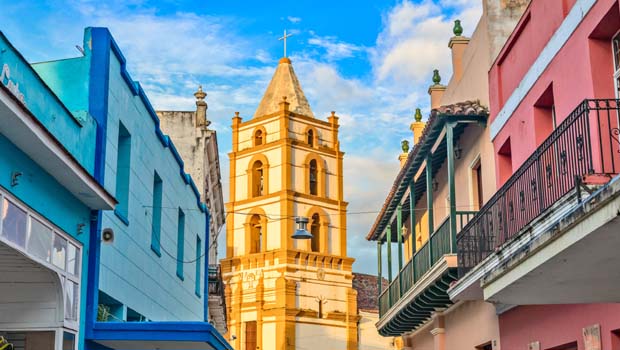 The founding of Camaguey in central Cuba dates back to the early 1500's. Since that time, the city has seen a rich history, ranging from numerous pirate attacks, the construction of beautiful churches, Cuban independence fighters, and tinajones, the symbol of the city.

Santa Maria del Puerto del Principe was the name given to the village once founded on the northern coast of the island one February 2nd, the day of our "Senora de la Candelaria", the patron saint of the village. However, the area chosen for the foundation was extremely arid and it was transferred to the shores of the Caonao River in 1516 and, after an uprising of aborigines, they definitively settled down between the Tinima and Jatibonico rivers in 1528.

The new settlement was located in the center of a large plain of Camaguey's chieftainship. The name is believed to originate from the Indo-Cuban term of "arauco" or CAMAGUA + EY. Camagua is a wild tree of low soils found widely throughout the island, and the ending -EY indicates a lineage origin or descendant from. This is why the term CAMAGuEY could indicate that caciques of the region were considered descendants from the spirit of that tree.

Besides the geometrical order around the Plaza de Armas and the Main Church, Camaguey is a city that has grown without an apparent order, hence the labyrinthian layout of its streets. Camaguey was subject to continual harassment from pirates, corsairs, and bandits who more than once tried to sack the city for the wealth of its economy, particularly based in cattle raising. Because of these regular attacks, additional security was desired, and it is believed the confusing layout of streets helped to hamper the efficiency of the raids.
QUICK CUBA TOUR FINDER
Camaguey is also known as the City of Churches. Having a very traditional catholic faith, its citizens devoted themselves to the foundation of chapels, churches, and convents. Most notable are the Parroquial Mayor, San Juan de Dios, San Francisco de Asis, Nuestra Senora de la Soledad, and Nuestra Senora de la Merced. In the outskirts, there are additional churches to be highlighted, including the Church of Nuestra Senora de Santa Ana, Santo Cristo del Buen Viaje, Nuestra Senora de la Caridad, and Nuestra Senora de la Candelaria.

Camaguey is also the cradle of notable Cuban patriots who joined the independence wars of 1868 and 1895. One figure to be highlighted among them is Ignacio Agramonte, known as "El Mayor" (The Major), who took a leading role in numerous heroic deeds, and whose love history with Amalia constitutes an epic poem in the Cuban history. His birthplace can be visited in the city, now a museum.

The symbols of the Camaguey are, without a doubt, the "tinajones" (large earthenware jars). These huge pieces of red pottery were introduced by Catalans and Andalusians to collect water in rainy days. They can be as large as 2 meters in diameter and they are commonly seen in gardens, parks, and especially in the yards of Camaguey's Colonial houses where they are still used to collect water.