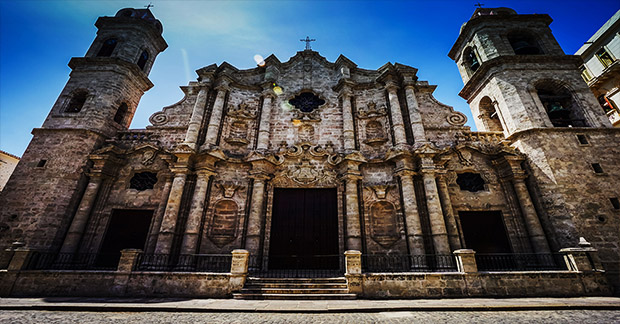 Founded in 1519 under the name of Villa de San Cristobal de La Habana, Old Havana is the historical center of the Cuban capital of Havana. At the time, travel between the Old World and the New World by sea meant that Spanish Galleons would be passing by the island of Cuba, and Havana quickly became one of the biggest shipbuilding centers of the time period.

Much of Havana Vieja was constructed during the Spanish colonial time period which is apparent in the city’s baroque and neoclassic architecture. Old Havana is listed as a UNESCO World Heritage Site, and many of the buildings that fell into ruin after the colonial period are now being restored to their former status and appearance.

The city was burned to the ground by the French pirate Jacques de Sores after he captured the city in its earliest days, and it was after this incident that the Spanish built the city walls and fortresses that can still be seen in the area today.

Castillo de la Real Fuerza, the city’s first fortress, was constructed in 1558; Castillo del Morro, built in 1587, San Salvador de la Punta among others are all architecturally magnificent and best examples of Cuba’s military architecture, and each has a unique history that is not to be missed.

There are many incredible attractions and historic things to do and see in Old Havana. An excellent way to explore Old Havana, is to embark on one of the guided walking tours of Authentic Cuba Travel® that follows the narrow cobblestone streets that connect the main colonial squares. Not to miss:

The Square of Arms, the oldest square in Old Havana and the original place of the foundation of the city, was named after the military exercises, events and ceremonies that used to take place in the square in the sixteen century. Today is Old Havana’s main tourist square, and it is surrounded by the most important colonial buildings such as the Palace of the Captain Generals, the Palacio del Segundo Cabo, the Fortress of the Royal Force, El Templete, and others.

Plaza de San Francisco was the harbour front of the city in colonial times. Galleons full of Spanish emigrants and African slaves used to unload and stock up in this waterfront square before continuing on journey to Las Americas or returning to Spain. Soon it became the main trade hub of the city where all sorts of goods and merchandise were exchanged. In 1909 a formal Goods Exchange was established when Lonja del Comercio neo-classical building was completed.

Another buildings of great significance surrounding the square are Terminal Marítima Sierra Maestra, the Palace of The Marquis of San Felipe y Santiago de Bejucal, the Havana Customs building, among others. Worth mentioning the Fuente de Los Leones, a white Carrara marble fountain and sculptural ensemble at the heart of the square dating from 1836.

Plaza Vieja, or the Old Square, is perhaps the most eclectic of all squares as it is surrounded by beautiful mansions and colonial buildings from the XVII, XVIII and XIX and even some examples of the early twentieth century. It is the only colonial square in the historical center that is not loomed over by a former Spanish government building or a church. Its uses vary from executions to religious processions to bullfights under Spanish ruling.
QUICK CUBA TOUR FINDER
Plaza del Cristo, or Cristo Square, takes its name from the Church of the Holy Christ of the Good Voyage that presides over the square. Sailors used to visit the church before embarking on a passage to Spain or Las Americas, or upon return to ask for good fortunes during the journey or give thanks for a safe return.

Plaza de La Catedral, or The Cathedral Square, is the most beautiful intimate colonial square built in colonial Havana. Yet in the 16th Century it was known as the “swamp square” because rainwater and sea water used to accumulate in this area as it was the lowest area in the city and so close to the sea.

However, in the 18th century when the Cathedral was promoted to this current rank, Havana’s wealthy families built their mansions in the area. The mansions stood the pass of time, and today you can still see the beautiful Cuban colonial architecture showcased in the House of Marquis de Arcos, House of Marquis of Aguas Claras, House of Count of Bayona, Lombilo Palace, and others. The Catedral de San Cristobal is by far the most impressive and prominent building in the Cathedral Plaza,

Other attractions that dot the landscape of the surrounding strip of Old Havana that was urbanized and developed after the demolition of the city walls, include the Great Theater of Havana, the Museum of Fine Arts, the Capitol building, the Galician Center, The Museum of the Revolution, theSevilla hotel, The Prado promenade, and many others.

While many of the buildings and structures that had been recently restored in Old Havana were damaged or destroyed during 2008’s Hurricane Ike, the city’s inclusion on the list of UNESCO World Heritage Sites in 1982 has helped secure the funds and manpower needed to foster efforts to continue restoring the city to its original glory.

Cuba travel has long been out of reach from the tourists of the United States, affording the island the ability to maintain many traditions without the influence of major tourism. Thanks to the lifting of some of the government’s travel sanctions, US citizens traveling for education purposes and to conduct professional research in their professional area now have the ability to take part in education tours to Cuba.