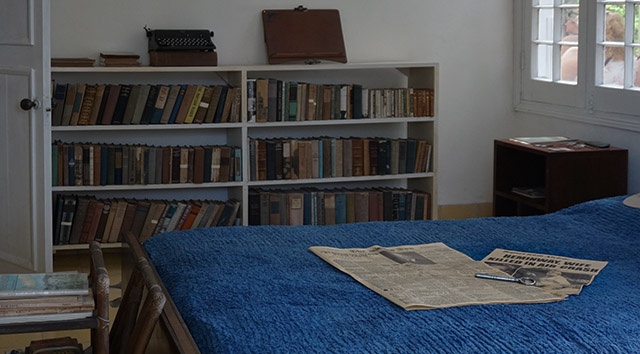 For most part of his fruitful career as a writer and journalist, Ernest Hemingway lived in two shores of the Florida Strait: Key West and Cuba. He was widely admired and respected in both countries where he wrote his best literary works.

Hemingway first discovered Havana in 1928, on a return trip from Europe, and with good part of the manuscript "Farewell to Arms" under his arm. Even though he stayed less than one day in the Cuban capital before continuing his journey to Key West, the city caused a distinct impression on the American writer.

As the famous author became more passionate with marlin fishing in the waters of the Gulf Stream, he came closer and closer to Havana ports. Soon the Ambos Mundos Hotel turned into his center of literary and marlin fishing operations.

Yet it is not until he returned from Europe in 1938 that he settled in Cuba for good. Carrying the baggage of the atrocities of the Spanish Civil War and separated from Pauline, he fell for Martha Gellhorn and soon rented a farm in the outskirts of Havana known as Finca La Vigia.

“For Whom The Bell Tolls” was completed from the watch tower of Finca La Vigia, his favorite place to write in the property. And when the book was published, Hemingway used some of the proceeds to buy the farm. Here Hemingway lived and wrote most of his literary works until 1960.
QUICK CUBA TOUR FINDER
Finca La Vigia's list of visitors is nothing short of amazing. Movie starts, famous writers, bull fighters, boxers are among the list of prestigious guests of the house. Ava Gardner used to swim naked in the swimming pool. Hemingway used to invite his friends to take off their shoes and wet their feet in the water where the naked prima donna had swum earlier.

Follow in the footsteps of Ernest Hemingway in Cuba can be a great experience yet somewhow challenging. There are traces of the author in places as distant from Havana city as Santiago de Cuba, at the eastern end of the island. Basilica de La Caridad del Cobre, the Saint Patron of Cuba, treasures Hemmingway’s Nobel Prize Medal, for example. Yet in Havana, a visit to places like Hotel Ambos Mundos, Finca La Vigia, La Bodeguita del Medio, El Floridita and Cojimar town are within reach of those on short Cuba tours.

“One lives on this island because one works much better and more comfortably in the fresh morning air than anywhere else ... I always had good luck writing in Cuba." Hemingway wrote to his friend Earl Wilson in 1952.

Another good friend of the author was Cuban, Gregorio Fuentes, the captain of the Pilar Boat from 1938 on. Gregorio lived in Cojimar, a fishing town in eastern Havana city where Hemingway used to keep his boat and was one of his favorite places to hangouts and even to box with some locals. In Las Terrazas, the town bar- restaurant place, you can still feel the presence of Ernest Hemingway today.

During the Second World War, the two men venture into fishing something bigger than marlins. With some machine guns and grenades on board the Pilar boat, they hunted for German submarines that were operating in the Caribbean. Germany’s objective was to sink merchant ships sailing from USA and Cuba stoked up with merchandise to support the allies in Europe. They never managed to sink any submarine but they reported on the position of one of those once.

In 1959, he bought a home overlooking the Big Wood River, and left Cuba—although he remained on good terms with Fidel Castro, telling the New York Times he was "delighted" with Castro's overthrow of Batista.

After Hemingway’s suicide in 1961, Finca La Vigia passed to the hand of the Cuban government, complete with Hemingway's collection of thousands of books after the will of the author himself. He is still beloved in Cuba and you can still feel his presence in the property and in other favorite Hemingway’s hangouts.