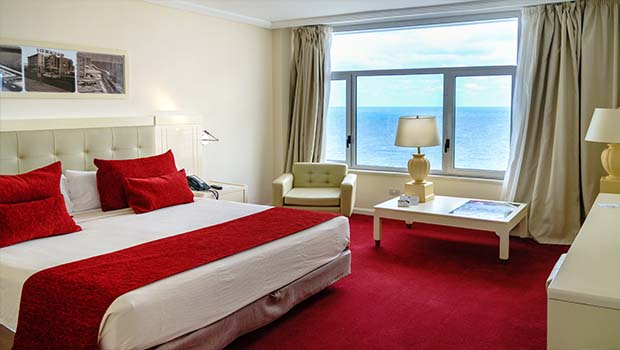 Rising next to the ocean in western Vedado, Havana, the 16-storey Habana Riviera looks like something out of 1950s Las Vegas or Miami, an airbrushed postcard taking one back to a very different time and world. Stylishly modernist, the building's 50s look (and feel) carries past the revolving door entrance over to the grand lobby, whose original structure, furnishings and decor have been so well preserved that one wholly expects to come across a group of velvet-clad lounge lizards savoring mojitos and Cuban cigars or a group of mafiosos talking shop on one of the old-fashioned sofas.

A bit over 50 years ago, such an encounter might not have been rare: the hotel was established by mobster Meyer Lanski in 1956, and the property's short-lived immersion in the world of mafia transactions and gambling is well-documented (the curious spherical structure next to the main edifice, painted in vibrant hues, was once a casino, acoustically designed to take the sound of chips and slot machines into the hotel and seduce guests).

The Riviera Hotel opened in December 1957 with a floor show headed by Ginger Rogers that was carried in part on American network television. The hotel-casino turned out to be an immense success. Asked why all the gangsters were tolerated in Cuban casinos, the U.S. ambassador Earl Smith reportedly explained, "it seems to be the only way to get honest casinos" (p. 297). Lansky's days in Cuba, however, were numbered when Castro took power in Havana. In October 1960 the Riviera Hotel and 165 other American enterprises were confiscated and nationalized.

Thanks to the ingenious building design, all guestrooms have views of the Atlantic, taking full advantage of the splendid location: at the north end of Paseo, right on Malecon, a short distance away from Vedado's entertainment offer and an insignificant cab ride away from Old Havana.
QUICK CUBA TOUR FINDER
The hotel has a fairly ample food and drinks and entertainment offer. The spacious lobby bar is set next to a row of large glass panels that place one almost literally next to the water, and the Mirador de la Habana restaurant has very nice views of the littoral and city. Reportedly one of Havana's better nightclubs, the Copa Room Cabaret is the stage for a Tropicana-like show and operates as a disco into the early morning.

Guestrooms, visibly built with comfort in mind, have space aplenty.

Other attractive features at the Habana Riviera include an outdoor swimming pool (with the original, three-level diving platform), a beauty salon, shops, a humidor and free parking outside. Traveling businesspeople or anyone organizing an event or conference also have many options in terms of meeting spaces, including the former casino, today a conference hall equipped with its own bar and stage. A less publicized detail is the modern artwork that graces the lobby and entrance to the hotel, which includes pieces by renowned Cuban sculptor Florencio Gelabert, a fact that could prove of interest to anyone with an eye for modernist art.

Chic, comfortable and tinged by a nostalgic air, the Habana Riviera is a well-located option in the Vedado area. Vedado is the cultural and social center of Havana City. Its attraction include from art galleries, shows and live concerts to restaurants. Vedado features most of the north-American hotels built in the 1950's such as the Riviera Hotel from where you can enjoy a great view of the city and the sea.

Cuban President Fulgencio Batista invited Meyer Lansky to become adviser on gambling reform, and to carry out, on a larger scale, a cleanup job like the one he had performed in the late 1930s. Lansky himself took over as operator of a newly established casino at the Hotel Nacional which was managed by International Hotels, Inc., a subsidiary of Pan Am, and a year later, 1956, he started work on his own hotel-casino, the Riviera.