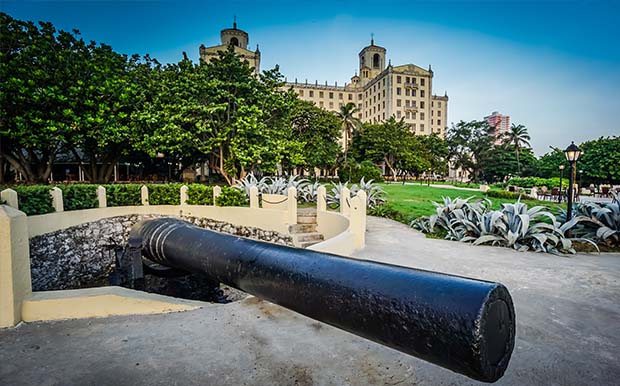 Sitting on a high bluff overlooking the Malecon, this is Havana 's signature hotel, and it's loaded with atmosphere. Two massive turrets loom overhead as you approach the entrance along its palm-lined driveway. The long, tiled lobby, with its high ceilings and heavy painted beams, is the heart and hub of this joint, and it's almost always bustling.

The Nacional de Cuba is an Architectural Landmark that has captivated visitors over seven decades. Declared "National Monument" for its patrimonial value in 1988, it features 426 rooms, amazing lounges and modern comfort.

The rooms themselves are large and well-appointed, although somewhat drab and showing their age. Over half the rooms have ocean views. Some rooms still have the original floor, bed frames and furniture from the 1930's. There is actually a Historical Floor where many celebrities left their presence, like Ava Gardner, Johnny Weissmuller and Bola de Nieve.

The property is full of columns and arches that show a singular confluence of neoclassic and neocolonial designs with art deco. The hotel has a vast lawn area on its high bluff that opens out toward the sea.
QUICK CUBA TOUR FINDER
A spot we recommend is the "Compass Card," an outdoor terrace made of marble inlaid in the pattern of a nautical compass. This is a great place to grab a table for a sunset drink overlooking the Malecon, with giant cannons protecting you on either side.

We also recommend going to the "Hall of Fame", a very special place with an exquisite decoration displaying on the walls the celebrities' pictures who have been to Cuba over the last half century. You can enjoy live music while ordering some of the Cuban most recognized drinks, and you can play your favorite songs in the jukebox. Everything is arranged to provide pleasure.

Luxury restaurant "Comedor de Aguiar". The most elegant and exclusive restaurants in town, offers the best of national and international cuisine and a varied wine list.

Creole restaurant "La Barraca". Located in the gardens of the hotel with a spectacular ocean view and the entrance to the bay of Havana, with an excellent menu of local food cooked on charcoal and served in clay pots.

Cafeteria "Film Corner". Offers a varied menu of light meals and snacks, as well as a quick room service, 24 hours a day.

Cabaret Parisien. Offers a great Show "Cubano, Cubano". It shows a fusion of Indoamerican, Hispanic and African cultures, that led to the Cuban culture.